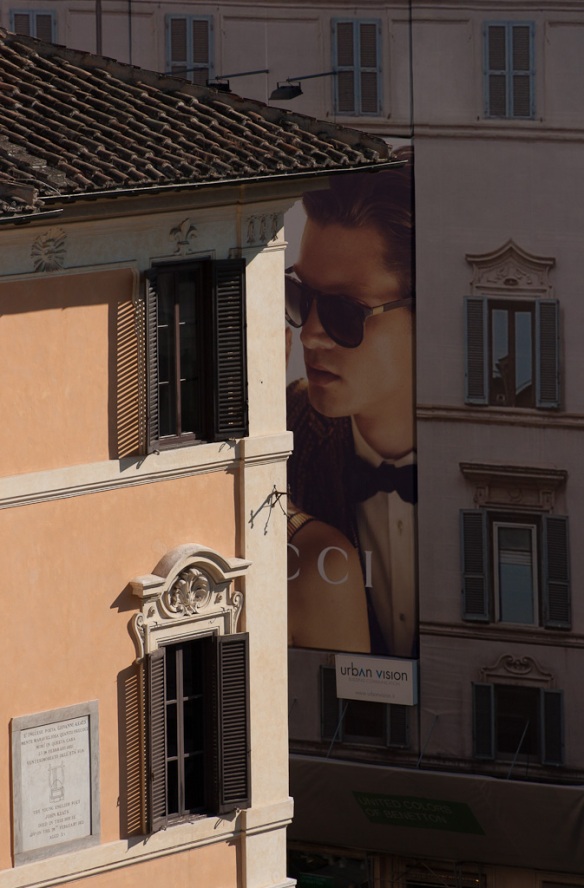 OK, I’ll admit it. I went back to Rome early. But in my defence, it was freezing cold on Monday morning and when I got to Assergi after an hour’s walk it did not exactly look inviting. The place where I was thinking of staying had a big, nasty canine barking its head off at me and the whole village didn’t look that nice a place. Did I mention it was cold?

So I decided I’d just pick up the bus from there and go back to Rome and spend another day sightseeing instead. “Just pick up a bus” turned into a two hour wait, so I was a tad stiff with cold when it finally arrived, but from taking the bus at one, I was back in Rome by 4pm, checked into the hotel shortly after. Happy days.

Yesterday, Tuesday, I went to the National Museum of Modern Art in the surroundings of the Villa Borghese. Great place and the cafe was lovely too. From there I meandered through the city, all the way to Trastevere where I had a late lunch and back up again, had a gelato at Ciampini and then decided to have a nice drink on the rooftop bar at the Spanish Steps. A great place to watch life in the city as I slowly savoured my campari soda and nibbled on olives.

Today, in less than two hours from now I’ll get on the train to Milan. I’ve never been there, except for passing through, so it’s a good opportunity to quickly see it, before flying from there to Amsterdam. 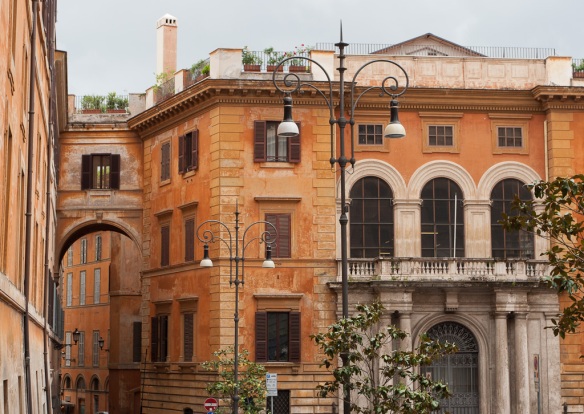 First of all a confession: I have no idea where I took this photo today. I got a little bit lost in my meanderings today. Not badly, just didn’t pay attention where I was going. I do know that there was some university building behind. Not that it matters; I just like the colours of these buildings. They make the city look so much warmer, even on another cloudy day.

After picking up my now pristine again white jeans from the local laundry, I left the hotel towards Piazza del Popolo and walked from there in the direction of the Pantheon, very much at leisure and letting myself be tempted by shop displays. I ducked into the Pantheon, surrounded by school children (indeed, no silence here either) and gaped at its incredible cupola.

For my late lunch I decided to be naughty and allowed myself a caprese salad. Sounds innocent enough, but someone who is lactose intolerant should probably have been smart enough to stay away from it. But I used to love mozzarella, so I thought while in Rome I’d have it just this once. I mean, how bad can it be?

Bad. For me anyway. So that’s the end of my mozzarella eating days. At least I really savoured every morsel this afternoon, so I’m not sorry, even if I’m feeling slightly unwell. And it was so tasty. Yum.

Before returning to the Hotel Alpi (a great little find), I picked up my bus ticket for tomorrow. First a bus to L’Aquila, where I change to a bus for Santo Stefano di Sessanio. From there it’s all going to be one big adventure. Nothing planned, nothing booked. Not too sure of internet access either, so updates might not quite be daily, but we’ll see.

It was spitting when I left the hotel and by the time I had made my way to Trastevere it decided to become more insistent rain. So not too many good photos today and am glad I held this one over from yesterday, taken from along the Lungotevere Vaticano. Above those houses is a beautiful walkway called the Passegiato del Gianicolo. It’s as green as you get in the city and wonderfully peaceful on a Sunday morning.

From the Passegiato I walked back through Trastevere where the streets started to fill with tourists looking for lunch. To compensate for too much food yesterday, my plan was to hang on until around 3pm for the second and final meal of the day. Ignoring a grumbling stomach, I got absorbed in photographing different types of door knockers, while roaming through the narrow and very photogenic streets.

The rain lightened a little, but not for long and by the time I had crossed to the other side of the river and neared the Campidoglio it was pouring down just as I was lined up in a slow-moving queue to get a ticket for the Musei Capitolini, my umbrella threatening to take wing. The Musei Capitolini were definitely worth the wait with all their ancient treasures. One of my favourite items was a stone candlestick, with delicately carved leaves on it.

Next up was an exploration of the Foro Romano, but not until I had eaten: linguine ai funghi porcini and a glass of red wine.

Looking at the Foro you can’t help but be amazed at what the Romans built, but let’s not forget they had slaves. Imagine how fast our renovations would be if you had recourse to that kind of work force. In fact, The Romans also pretty much invented the original Hunger Games, sans television of course, but really the concept was there. Cue the Colosseum.

For me the Palatino was the most magical of all and I wished for weather more conducive to soak up the atmosphere for longer. Another pleasant surprise at the end of the day was San Giovanni in Laterani, particularly the byzantine paintings in the cupola. But nearly seven hours of walking had depleted the battery and it was time to make a retreat back to the hotel. Last day in Rome tomorrow. After that the mountains beckon.