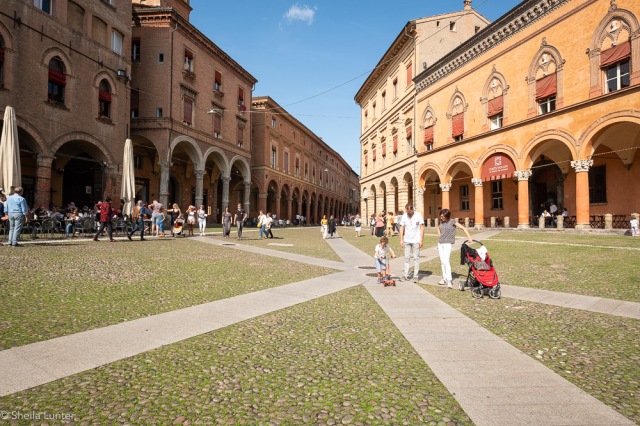 Thirty years ago I spent almost a year studying in Bologna under the Erasmus Programme, a student exchange programme that was then entering its second year. I had spent a year taking Italian classes to prepare myself and was going to do research for my subthesis. It was a fascinating time with many challenges, the making of new friends and alliances. I spent most of my time getting books out of the library and studying them in our favourite cafe, where you could count on always seeing one of the gang at any point in time. For most of us it was our first time living overseas and so it was a formative time.

I had held off returning to my old “home” until the summer madness had settled down but by late September it was time to return and see if it still looked like in those heady days of 1988-89. Since I’ve been here I seem to have a particular knack for always picking the weekend that some major event is taking place in the location I’m visiting and Bologna was no exception. In this case it was the Coldiretti that had taken over the entire centre of Bologna with their white tents.

It takes only an hour to get to Bologna from Milan on the Frecciarossa and once I made my way out of the caverns of the station (the high speed station is about three floors down from the ground) I steered towards Via Irnerio to find my old “way” to university. Thirty years may have passed, but the city itself hasn’t changed and the university area is still full of graffiti as it was back then and as is any student area in any city. It felt surreal to be walking the streets, having moments of recognition, moments of feeling lost, trying to remember if it was this corner, or whether it was further on, walking past the library where I spent so many hours and then suddenly, when I had given up on finding it, I walked straight to Bar Piccolo – my cafe! (now called Piccolo & Sublime and still looking the same yet different. Admittedly, nothing special to look at, but for me it holds special meaning). I had to stop there and have a coffee and a spremuta for old times, memories flooding back. I wonder where everyone is now and what they’ve done since those days that we shared these experiences in this particular location.

Fortified by coffee I made my way to the Due Torri, the two towers of Garisenda and Asinelli, where I found large tourist groups milling around them. It was a shock to the system; Bologna had been a quiet place, undiscovered by tourism back when I was studying here. The place where the Due Torri stand was quiet, somewhere you passed on your way to somewhere else. Now it is a sight in itself.

From there it wasn’t far to the Santo Stefano complex, seven churches all connected together. I remember going there once with one of my UK friends who was studying art history and who made me see the paintings there in a different way; an experience I’ll never forget. Now it is a stop on the tourist trail with many people visiting. And I find it difficult to see many visitors snapping photographs non-stop, to hear them talking loudly. I’m not religious, but I can still respect someone’s house of worship and I will generally not take any photographs inside churches or other places of worship. These places should remain sacred to their users.

Dodging the Santo Stefano crowds for other crowds I made my way to Piazza Maggiore and the San Petronio church. Coldiretti had taken over Piazza Maggiore and I sought refuge in San Petronio, still as beautiful as ever. From there I walked around the back streets, in search of a lunch spot. Over lunch I contemplated the best course of action for the afternoon and decided to opt for the walk up to the Basilica di San Luca. Duly fortified by tortellini in brodo I set out for the long walk uphill. 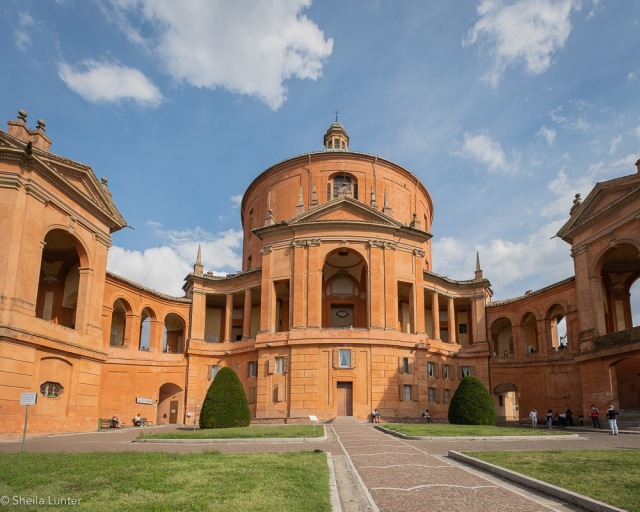 First I made my way to Porta Saragozza and from there followed the covered walkways leading out of the city and finally commencing the climb uphill, steep in part (paying forward for sins to come like gelato). When I did it years ago it was mainly old men, priests and nuns who walked up here. Now the lycra clad fitness crowd had adopted it as their workout of choice. I worked myself into a sweat walking uphill, feeling old and old-fashioned, but when I got to the basilica it was such a joy to arrive, take in the views and enjoy the restorative coolness inside of the basilica. Once I had cooled off I slowly made my way down the steps again, returning to the Piazza Maggiore, Neptune’s fountain and finally Via Indipendenza for an aperol spritz before heading back to the station and that gelato en route. 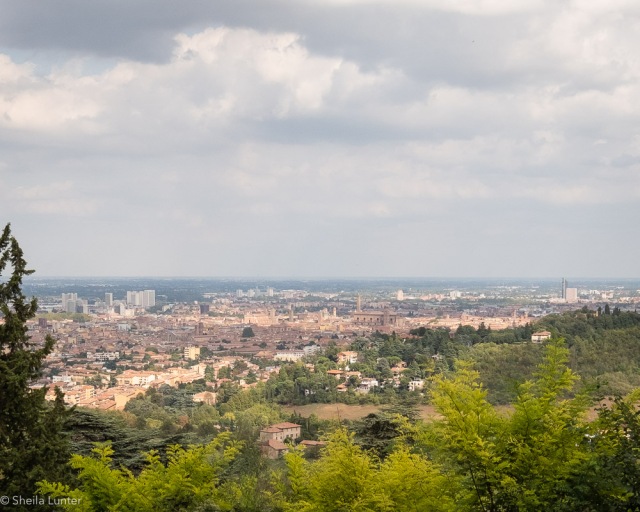 I still feel I only had a fleeting visit to Bologna and really want to go back another time to explore the areas I did not go this time to avoid the crowds. I’m thinking mid-winter could be a perfect time for that. The tourists will be gone and it might remind me of those winter days in Bologna during my student days. It is lovely to revisit the past, but also a slightly melancholy exercise. I don’t know who said this, but “Some days I wish I could go back in life, not to change things, just to feel a few things twice” sums it up nicely for me.

3 thoughts on “Back to Bologna”