At the end of July I took my father, who was staying with me, on a short weekend escape from the sweltering temperatures in Milan. I didn’t want to join the crowds on Lago di Como or Lago Maggiore, but was looking for something a bit quieter. On the advice of others I opted to go to Lago D’Orta instead and was very glad I followed that advice.

Lago D’Orta is an approximately 1.5 hour drive from Milan and very easily accessible. I had booked into a small hotel on the lake itself, but outside of the village of Orta San Giulio itself. We arrived in good time and were able to go for a dip in the lake, which was particularly welcome after the seriously high temperatures in Milan. Dinner was on the lake itself with a spectacular view to the mountains surrounding us. One of the features that stood out was the Santuario della Madonna del Sasso, a sparkling white church built on an a high outcrop of rock across the lake (indeed it is that white building on the rock in the picture below). 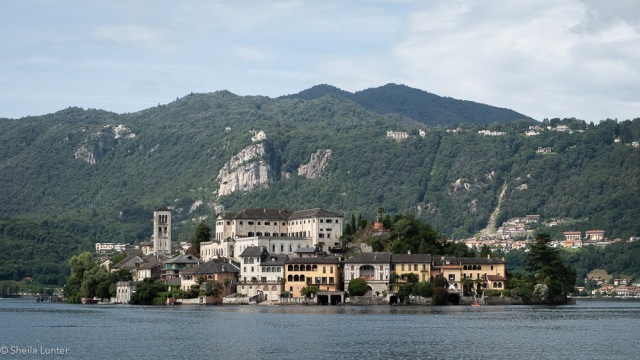 The next morning, after a leisurely breakfast, we set out by car to reach the Madonna del Sasso, which involved some interesting hairpin bends, narrow streets through villages and really elevated my driving skills to the next level. Big kudos to my father who stoically sat through the drive, although I’m sure his eyes occasionally nearly popped out of his head! But we got there and the drive was absolutely worth it. And I was grateful I wasn’t one of the cyclists who laboured their way up the hill.

The promontory allowed for beautiful views over the lake and the surrounding mountains. There is always something special about going higher up for a different perspective on your environment. After we descended again to the village of Pella, we continued our drive around the lake until we were back to our starting point.

The next day, after we checked out, we drove to Orta San Giulio itself and went to have a look at the very picturesque little village. Having negotiated the steep descent into the village and the cobblestone streets, we arrived in the main piazza from where boats run to take people across to the Isola San Giulio. Legend has it that once upon a time the island was infested by dragons and mad snakes terrifying the local fishermen. St Giulio used his cloak as a boat to reach the island and with few words and no violence he convinced the monsters to leave. Therefore sadly no dragons to see here, so we skipped the visit to the island, but had a coffee in the piazza instead, before driving back to Milan, with a little detour along the lakes of Lago Maggiore. 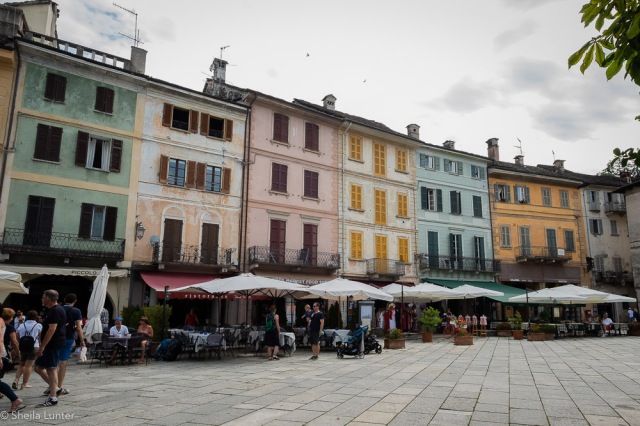 As mentioned earlier, Lago di Como, Lago Maggiore and Lago di Garda are the tourist (both foreign and local) magnets. In summer Bellagio is overrun with visitors and the at times narrow roads around the lake become clogged with cars. It is similar with Lago Maggiore, but to a lesser degree; roads around Lago di Garda also become very congested. For those in search of serenity, Lago D’Orta is a much better choice. It’s very pretty, an easy drive to get to, nice and affordable hotels and not as hectic as elsewhere. There are also lots of walking trails in the surroundings, so those who like to be a bit more active, will enjoy this too.