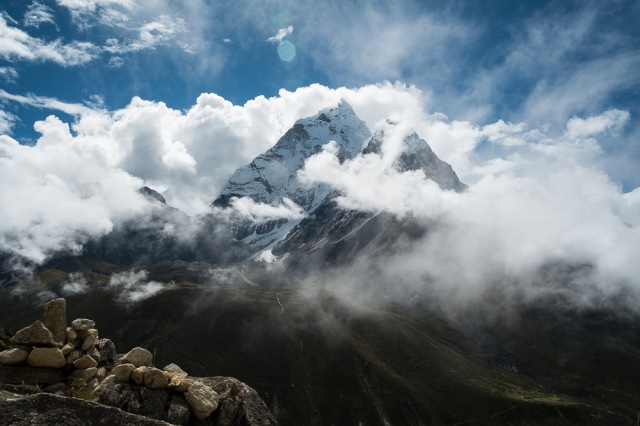 Admittedly your correspondent has been less than dutiful in the last few months, after making all kind of promises to write blog posts from the trail. So much for that. Wifi was not as ubiquitous in the mountains as I was led to believe, but I was also quite happy to be disconnected from the world for a while. Then on the way down, the flu struck and I had to spend all my energy on getting back and getting home. Back home, other pressures called and then more than a month has gone by without any blog posts on Nepal. Time to remedy that.

I left you all on a literal cliff hanger in the sherpa village of Namche Bazaar. It’s perched on the mountain in a clear horseshoe shape. Steep steps inside the village are a dominant feature and at 3,500 meters it’s the first bit of significant altitude you hit on the trail. Most trekkers spend a day here to acclimatise, slightly breathless. It’s also the last stop for some serious stocking up on gear, but in between the gear shops you also find things like the Namche Bakery and I’ll confess I was very happy to grab a bag of peanut cookies for sustenance up the trail. 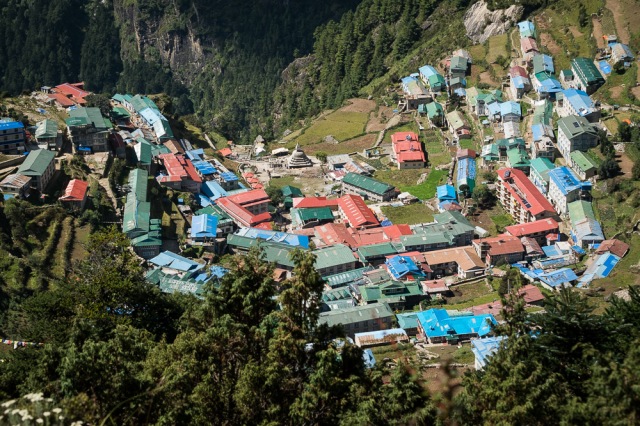 Essentially the trail involves walking from Namche to Tengboche, first on a traversing trail, then descending and ascending steeply, passing through a place called Punkhi Thenghi where prayer wheels spin with the force of river water. From Tengboche it leads via Pangboche to Dingboche (don’t ask me what “boche” means, but there sure is a pattern here), where another acclimatisation day is spent. Then the trail climbs up to  Lobuche, where the number of teahouses and facilities is ever diminishing, and the final day involves walking through bits of glacier moraine to Gorak Shep, where you arrive on the roof of the world, which feels oddly like the end of the world. There usually is an afternoon walk to Everest Base Camp, followed by a climb in darkness up Kala Pattar the next morning for dawn views before commencing the descent back to lower altitudes. 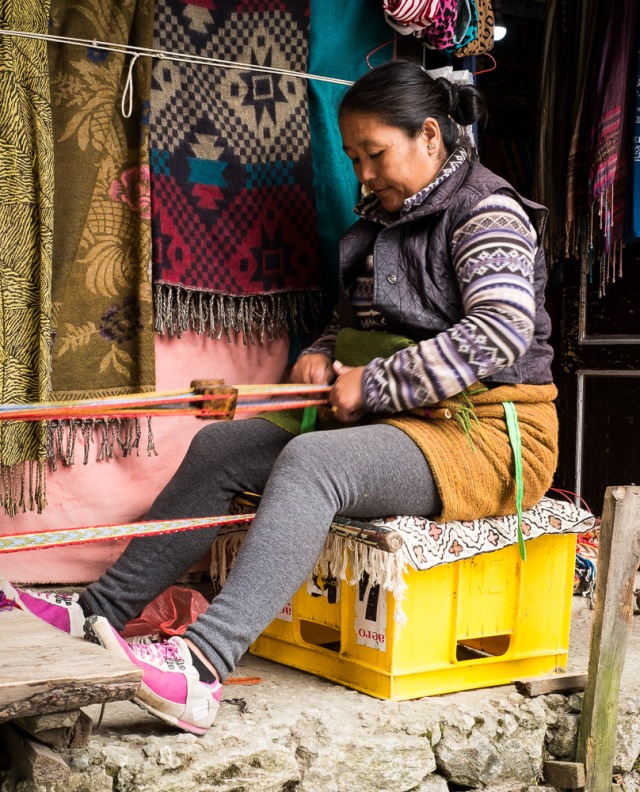 The day we left Namche, the clouds cleared to make for a beautiful day of walking. The ascent to Tengboche was harder than expected, but we arrived perfectly timed to visit the inside of the monastery, which is something I didn’t manage to do 12 years ago. In Tengboche I also started to connect with some people who would turn up in the same teahouses: a couple from Germany and young Bre from Colorado.

The next morning offered photographic opportunities around dawn. The mountains were hidden in clouds, but gradually they swirled around, up and down, and revealed ever changing views. Everest became visible and Khumbila, the sacred mountain, was bathed in golden light. Just after Pangboche, in Shomare, we stopped for lunch. I got into a conversation with a Brazilian couple who were descending from Gorak Shep, all the way to Namche. Soon the German couple arrived too, as well as the guys from Bangladesh and the couple from Austria. I love this mini United Nations feel that a trek can bring, everyone cherishing the same goal of reaching the roof of the world and encouraging each other. 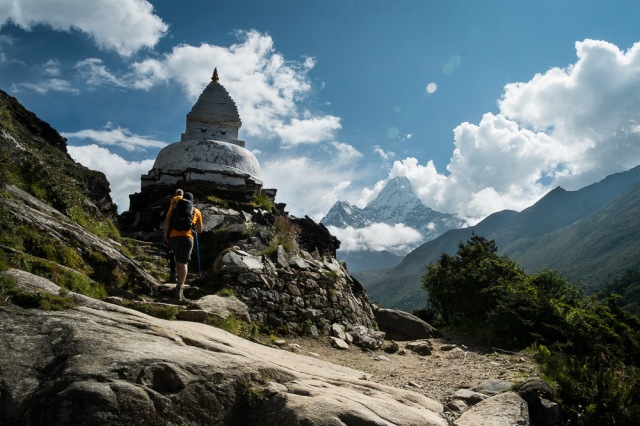 Our arrival in Dingboche in the rain, was followed by another acclimatisation day , which was used to hike up a steep hill behind the lodge. With clouds being the dominant feature again, we ascended until stage 2 and bailed on the last uphill. Back at the lodge we met Adam, from the UK, who also turned up in the same tea houses.

On the way to Lobuche the next day, we reached a river crossing where a ramshackle plywood bridge was the means of crossing. I felt distinctly uncomfortable, which was echoed by all the porters I saw rushing over the bridge and away from the riverbed as fast as they could, regardless of the heavy load they carried. I followed their lead and got through it as fast as I could. Once out of river bed I found out there was a dead horse in the river; must have fallen off that bridge.

Climbing through Thugla pass we reached an eerie place, with memorial cairns erected for all those who died on Everest. A moving place, but sadly there were too many people who saw it as an opportunity to take selfies next to memorials, which I felt was quite disrespectful.

Once we arrived at Lobuche, the first signs of fatigue and an altitude headache made an appearance and more bad news was to follow. Intel on our proposed itinerary over the Cho La pass wasn’t good. It appeared the pass crossing wasn’t feasible at this point in time and that we should consider alternative routes to Gokyo. Tough decisions would have to be made soon.

The final ascent led through glacier moraine and led into an extraordinary  place that felt like the end of the world. We reached Gorak Shep the next day by 10am and after an early lunch walked out to Everest Base Camp, which took almost two hours. There I sat contemplating the Khumbu Icefall, wondering about the people who decide to climb Everest and take the associated risks. With all the effort that went into getting here, I can barely imagine how much more fitness, energy and determination it requires to go all the way to the top.