This has turned into a bumper post that wraps the Antarctic journey up. Lots of photos and videos here. enjoy the read.

On this particular morning we are moored at Cuverville island and our excursion is going to take us right onto it. There is a challenging hike for those who want exercise, but I want to enjoy the photographic opportunities, so opt for getting off the ship after the hikers have gone.

It is a magical zodiac trip in. We can’t see the landing spot from the ship because it is a bay clogged with smaller icebergs through which we have to navigate carefully. There is a dreamy, surreal quality to this and we all feel like Alice in Wonderland as we pass avant-garde shaped bergs. Nature is truly the best sculptress of them all.

Cuverville Island features several gentoo rookeries, which are easily spotted due to the red/brown staining of the ground. The gentoos often get very dirty and there is a steady line of gentoos wandering along the shoreline for a safe place to bathe, usually in the company of many other gentoos to increase the odds against the leopard seals that are roaming in the water, under the surface. Gentoos are fast swimmers and they torpedo through the water like there is no tomorrow, jumping out at intervals. Or they float in the water, using their wings to wash off the dirt off their bellies. And when they’re not in the water, they are on land looking after their eggs or courting to produce an egg. There is lots of courting going on, it being the breeding season, and the whole courtship ritual looks like an 18th century dance.

I start off close to the landing site and then wander further out towards the other rookery where I also get a better view of the scenery. It’s near where the gentoos jump into the water and this offers great entertainment. And then all of a sudden there is a loud crack and as we trace the origin of the sound we see an iceberg breaking into parts, one part pulverising into the bay, with the other part starting a see-sawing action. With the camera on the tripod pointed in the direction of the berg I am lucky to be able to capture most of it on video, minus the breaking action itself. The wave, generated by the collapsing part of the iceberg reaches the shore soon.

It’s a lovely morning and the boat ride back is still a wonderful experience. Here’s how it looked like from my angle.

Once we are all back on board we sail for Port Lockroy, our scheduled visit for the afternoon. To get there we have to move through the Neumayer Channel, which is stunningly beautiful with not a gust of wind. The surface is like a mirror, reflecting the mountains on both sides and mirroring bergy bits floating in the channel with ice of the bluest blue.

Port Lockroy is a former British research station and is now maintained as a museum and a post office, operated by the United Kingdom Antarctic Heritage Trust. The zodiac trip from the ship to the landing site takes us through the most crystal clear waters imaginable and we see gentoos porpoising through the waters.

Bransfield House is the main building we can visit, which features both the museum as well as the post office / gift shop. Of course a penguin buff has to be bought, as well as postcards dispatched (they will take a while to get to their destinations). Gentoos are everywhere around the building and at times even attempt to enter Bransfield House, but get escorted out quickly. They are in full breeding mode, with much copulation going on and more or less effective sitting on the eggs. Some have dug a hole for their eggs, but with the snow melting the eggs end up in water, which is not going to aid their incubation. They even nest under the building. Snowy sheathbills hang around also to have a go at the gentoos’ eggs. Interestingly enough, a research study is showing that the gentoos on the visitor side of the island are doing better than their counterparts in the protected area.

After we leave Port Lockroy we try to make our way to the Lemaire Channel (also known as Kodak Alley), but unfortunately the ice conditions are not favourable and after a good attempt the captain makes the decision to turn around and we sail to Paradise Bay instead.

The next morning we wake up in very calm, but snowy conditions. We are the first to get out on the zodiac cruise and we cruise around the bay watching wonderful icebergs. We see penguins and a kelp gull attacked by skuas and for a bit of action a calving of a glacier. Gradually the snow gets heavier and after we cruise past Brown Base (Argentina) we head back to the ship. Before we get there we are welcomed with champagne and biscuits by the hotel staff who have crates of glasses and champagne bottles in their zodiac. A lovely surprise. 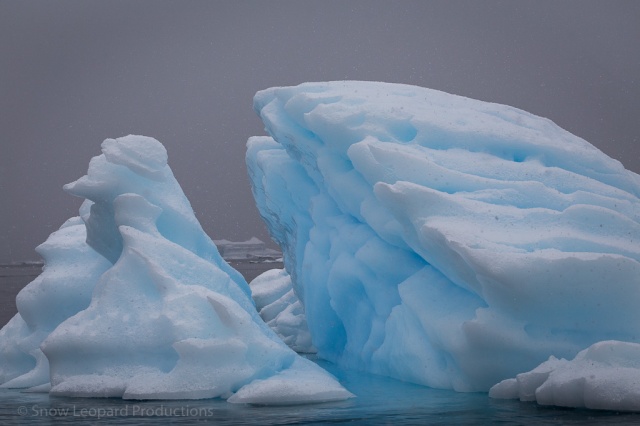 In the afternoon we anchor in Neko Harbour where most of us head out for the hike up to the look out point. First off we see a Weddell seal near our landing site, who looks at us curiously. As we start hiking up the hill, I’m in the first group and we post hole through soft, fresh snow until the going gets a bit better higher up. It’s quite a work out, but the views are completely worth it when we get to the top. We look out over a glacier and can see the ship as a tiny boat in the bay. The other walkers look like minute ants.

For the downhill, the crew have organised two slides where we can slide down the hill, one a faster and longer one, the second one a bit slower and shorter. Needless to say this is probably the most fun everyone has had in a while and it is a great leveller as we all connect with our inner child and simply enjoy the pleasure of sliding down, again and again. The expedition staff later tell us they have never had so many people slide down the snow, with some going for 2-3 repeats if not more. 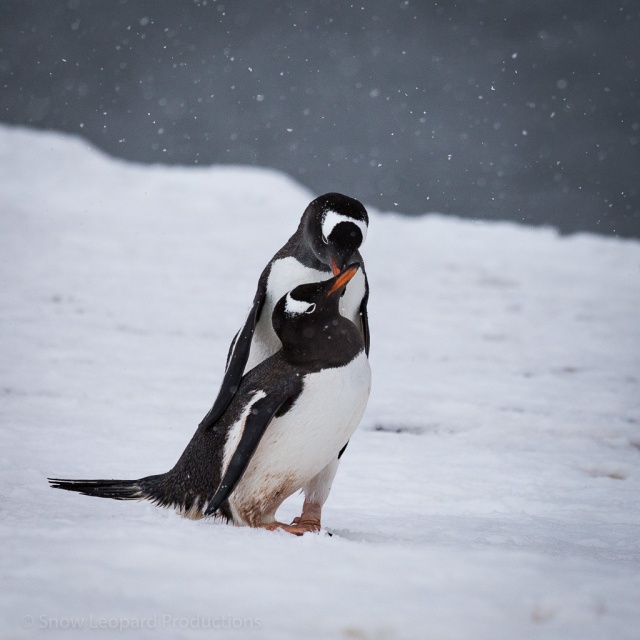 And so we move to our last day in Antarctica. Our first stop is Deception Island and to get there we have to sail through the very narrow Neptune’s Bellows. It may look wide when you approach it, but the trick is to avoid the submerged rock needle in the middle of the entrance, which means the captain has to put the boat quite close to the starboard side of the opening to get through. Deception Island is a volcanic island, which most recently erupted in 1969. It’s a strange idea to be setting foot inside the caldera of an active volcano!

We are landing at Whalers’ Bay to view the remains of the whaling station, including an aircraft hangar and a scientific station house. It will also be the site for those who want to do a polar plunge, and although I’ve put on my swimsuit in anticipation of the plunge, I realise once I’ve walked up to Neptune’s Window that a polar plunge would not be the most sensible thing to do in the current weather conditions. The wind is blowing a gale and while the temperature of the water doesn’t scare me (I did that in Greenland after all!), it is the emerging from the water in this wind that I am worried about. After all I have a birthday party to attend later that week (my own), so I let it be this time. Which means I’ll have to return to Antarctica to complete my bi-polar plunge!

As I walk up to Neptune’s Window I hear that a Leopard seal has been spotted. A Lep! So much coveted by me as a sighting, but I am too far away to get a good look and even if I went back, by the time I’m going to be down there, she will be gone for sure. And so all I can do is aim my zoom lens at her and hope for the best. The result is actually not bad, but not really display material. Apart from the Lep, there are also several Weddell seals dispersed over the historic site.

We then sail for our last landing site in Antarctica in the South Shetland Islands. Half Moon Island hosts a Chinstrap penguin rookery and the journey there is just beautiful. Although windy as hell, the sky is finally opening up and turning a gorgeous blue. Close to Half Moon Island we encounter the Ocean Endeavour of Quark Expeditions heading out. The wind seems to increase even further and we fear that it may be too difficult to shuttle us in on the zodiacs with this weather. But the captain and the expedition staff work miracles and make it happen. They do warn us to expect a wet ride and that we certainly do get, but we are all far too excited to finally see the Chinstraps to worry to much about some big splashes and spray. That’s what waterproof gear is for!

More than any other penguins we’ve seen, these Chinstraps are really obsessed with pebbles and they are busy running hither and thither with their pebbles, trying to impress their females by adding stones to the nest. One Chinstrap is really of the opinion that bigger is better and tries to carry a large slab of rock. He doesn’t succeed, but does carry it quite a way. The funniest sight is the one stranded Macaroni penguin, who has somehow washed up in this rookery of Chinstraps and apparently has been there for years. Perhaps he doesn’t know he is a Macaroni…

They also love tobogganing and we spend quite some time watching them launching themselves towards the sea over the snow. It really is a wonderful sight and a perfect conclusion of a magical trip. The Drake Passage still awaits, but we prefer to ignore that little fact for now…

As it turns out, the first day of the Drake Passage is pretty good, really the Drake Lake. But we know that worse is ahead with the forecast predicting increasing wave activity as we get closer to Cape Horn. The captain is going as fast as he can to get as close to Ushuaia as possible. It is not until the final night at sea that we start hitting the bigger waves after dinner and the dancing in the bar takes on an interesting aspect as the ship moves through the waves! It gets most interesting during the night when creative moves are required to stay in bed and in the morning we discover one of the tub chairs and the heavy glass table in a tight embrace in the corner against the wardrobe.

Our final night on the ship we are already in Ushuaia and are able to go out for a drink in town after dinner. A number of us head to the Irish pub for a few drinks where we duly find all the crew relaxing as well. After a few drinks we walk back to the ship to finish our packing and put our suitcase out for transport to the airport. It is hard to believe my dream journey has come to an end; it feels as if I only just started. I now understand why so many people take multiple trips to Antarctica, despite the enormous cost. Nothing else compares.