Our third day on South Georgia turns out to be our best day yet. Our first stop is at Gold Harbour, which is located towards the eastern side of the island. Expedition leader Kara tells me that Gold Harbour initially wasn’t on the itinerary, but that she firmly decided to insert it, as it is her all time favourite spot in the world. And I can understand why when we get there. It is a lovely spot, a black sand, crescent-shaped beach, decorated by hanging glaciers, that hosts an abundance of wildlife for which there are barely words to describe it.

But first we have to get off the boat, which is not easy this morning, as the swell is very strong and it takes good timing to get into the zodiac. Then, waiting for the others to board, it is not a pleasant feeling, but once on land, all that is forgotten. Kara did say you can’t walk very far and there is an obvious reason for it: you can barely move amongst the wildlife, there are fur seals, elephant seals, lots of weaners and lots of king penguins with the occasional gentoo penguin in between. The gentoos seem to like to mix in with the king penguins and sometimes you have to look hard to pick the odd one out. It is a magical place where you can just sit on the sand and the wildlife comes at you.

The elephant seals are funny to watch. Big blobs of blubber sprawled on the beach, eternally seeming to snooze, but ever watchful, particularly if pesky brown skuas try to get a bit too close or peck at their skin. One has a grin of wayward teeth, others are toothless. Every now and then a side flipper goes up in the air, as if waving at us. Young weaners curl up and twist their bottom flippers before stretching out again.

King penguins come and go, often walking in long lines along the shore, until one of them decides to have a dip, followed by the entire line. Penguins are indecisive birds, often looking very pondering, but the most indecisive of penguins we are yet to meet.

We watch a giant petrel trying to take off from the sand, unsuccessfully. It is like watching a big A380 taking off from the runway and tentatively lifting itself in the air. If the run up is not long or fast enough, take off inevitably fails, but when it does work out, it’s amazing to watch.

But all good things must come to an end and eventually we have to leave this magical place. As we cruise around the corner towards Cooper Bay for our afternoon zodiac cruise, we get treated to a pod of humpback whales, who surface near the ship. It is a real treat to finish this delightful morning.

After we have swung around to Cooper Bay, we head out for a zodiac cruise. We are really lucky that Brad is driving our zodiac, who is absolutely fantastic at it, knowing how to keep it stable for the photographers amongst us, even in a swell. We see seals and penguins on the beach, a seal that skies down a snowy slope towards the beach (and obviously has done that before!), lots of birds, including Antarctic terns and seals swimming in the swirly waters between the abundant kelp.

Towards the end of the zodiac cruise we get close to the macaroni penguin colony. Macaronis are named after the British dandies who had their hair in a particularly way, similar to the crazy yellow hairdo these penguins are sporting. They are a delightful bunch to watch; quite different yet again from the other penguins we have seen so far. Eventually we reluctantly move back to the ship; we would have loved to stay out there longer, but others need to get to enjoy their zodiac cruise, so it’s time to make way. 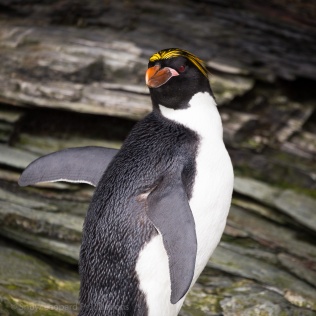 As soon as we’re on board we receive the great news that we will cruise around Drygalski Fjord before rounding the easternmost tip of South Georgia and setting sail for the Antarctic Peninsula.

Drygalski Fjord is an absolute treat and it’s a stunning conclusion to South Georgia. The sun comes out in golden hues and illuminates the peak of Mt Macklin, which is being unveiled out of the clouds. It is the perfect finish of our visit to this remarkable island, which really grows on you as you spend more time on or around it.

One thought on “A gold star day”