Sunday morning heralded another blue sky day. No rest for the wicked as at 8.15am I was due to meet with a guide to take me along a walk on the Brazilian side of the falls. The nice thing about staying at the Hotel das Cataratas is that you are inside the national park, which means you get to wander around early in the morning and at the end of the day when all the tourists are gone. We set out for our walk and only encountered maybe four other people, all hotel guests.

The light on the falls in the morning is beautiful and the path that starts at the hotel meanders down and along the side giving a very panoramic view of the falls. While the Argentinian side gets you up close and personal, the Brazilian side is more visually attractive in my view. And of course that bonus of not having to share it with lots of tourists at the same time…

The path leads through various viewpoints to a suspended walkway into the Garganta del Diablo and this ended up being one of the things I most enjoyed. Having put on a rain jacket myself and a rain cover for my camera I headed out into the spray right to the edge. Rainbows were everywhere and I even saw an almost perfect circular one – only the tiniest bit was missing, but it was so large that I could not capture it on my camera. They weren’t vague rainbows either, but really strong in their colours. There was only one other person on the furthest platform and we both took the spectacle in quietly. There was something really purifying about this force of nature raining down on you. It’s hard to describe without sounding a bit strange, but it was really a special moment in the day.

After the walk we headed back to the hotel and there I relaxed by the pool, followed by a snack, before heading out for the next adventure, the Poço Preto (Black Well) tour. The only other participant was Adam from Texas who was visiting for a conference. We both opted for doing the first part of the tour by bicycles (you get a choice between walking, cycling or jeep) and headed out in the shady glades with our two guides, Ulisses and Eric, who provided information about the flora and fauna we were encountering. A lot of the fauna were flying ants, which hovered in the sunny patches and had a tendency to fly into your mouth or your eyes, so I kept my sunnies firmly on, even if I didn’t quite need them in the shady woods. 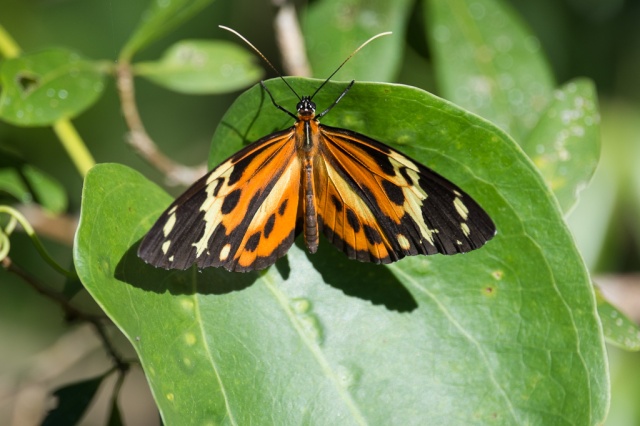 After an enjoyable ride we reached the river and while we waited for the boat to arrive, we walked to a watch tower from where you had a view of an alligator pool. Didn’t see any though, but lots of cartwheeling birds with a death wish. The boat took us upstream for a while to the Poço Preto area, which is a deep opening in the riverbed, making the water look black. From there we turned the boat around and headed downstream, seeing an alligator sunning himself and taking in the immensity of the forest here. The final part of the trip was a paddle in an inflatable canoe. We decided to share one, but did not impress our guides when we veered off course, but eventually found our way back again to where they wanted us. I swear I was steering straight to where I wanted to go!

Back at the hotel I decided to do the morning walk one more time and see the falls at sunset. This time the paths were still pretty full with day visitors, so it was a different experience, but the colours were stunning, particularly at the Garganta del Diablo area. Then it was time for a light meal in the bar an an early night, before getting up at 3.30am to get my flight back to Sao Paulo.