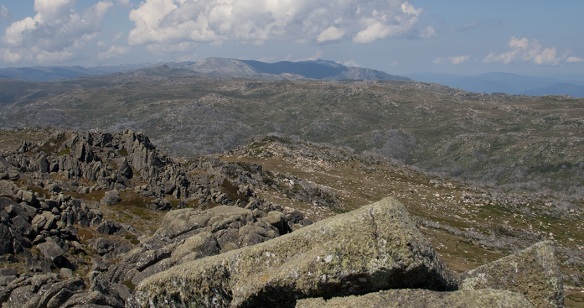 The weather forecast had persistently looked pretty dreadful for the Australia Day long weekend, but just when I looked one more time late wednesday afternoon, I realised that of all the surroundings, the Snowy Mountains would have a window of two days of good weather. It was just enough to climb Gungartan (2068m)* near the Rolling Grounds and I thought ‘oh what the hell, I’m going.’ The walk had been on my to-do-list for a while now.

A quick mental scan of the kitchen made me decide I better pick up a freeze-dried meal before going home and I made it to Macpac just before closing time. There I realised I’ve obviously been buying too much gear of late, as the staff are starting to recognise me and asked if I had tried my latest purchase yet.

I checked the weather radar one final time before leaving the next morning and after a relaxed drive I found myself just after noon at Guthega Power Station for the start of the walk. As I laced on my boots the first march flies appeared. A layer of repellent later they weren’t so keen on my company, but the moment I took the pack off, squadrons would appear in the sky and descend to turn me into a pin cushion through my pants and shirt.

The weather was warmer than I had bargained for, but the climb up the track was fine. It was later that I got more bothered by the heat and had to slow the pace to a bit of a plod. And despite having aimed for making the pack as light as possible, the pack started weighing itself down after a few hours and with the damn flies abundant, a good break was just not an option.

Schlink Hut appeared just before 4pm where I bumped into Mark from Sydney, who told me I was the first person he had seen in five days of walking in the area. Shortly after setting up the tent the clouds rolled in and a gentle but fairly steady rain started, just as three other walkers arrived, also from Canberra. Dinner was convivial with the five of us huddled in the hut sharing walking stories. I finished the evening reading Hemingway’s The Snows of Kilimanjaro in my sleeping bag with the rain gently pattering on the tent roof.

By morning, the clouds had mostly cleared and it looked like it should be possible to get to the top of Gungartan. I left my pack at Schlink Pass and started scrub bashing my way uphill. The grass was still wet from the overnight rain and I was happy I’d put on my gaiters to avoid getting soaked. As I got to a pile of big rocks I realised that unless the cloud truly lifted, there was no way I could find my way across the tops to the summit trig. Right that moment they melted away, disappearing into thin swirls and I could look straight across to where I wanted to be.

Crossing the tops I came to a scrubby patch and I pondered whether to walk through it or around it. I opted for the latter, which turned out to be a smart move: as I walked around it there was suddenly an almighty crashing sound. I froze in my tracks and in an instant a wild pig burst out of the little scrub and bolted away to the left of me. I don’t know who was more shaken of the two, the pig or me, but I knew that if I had gone through the scrub I would have come off second best!

Shaken but not stirred, I continued on and about half an hour later I scrambled up to the trig point and felt pretty smug looking at the beautiful clear view that presented itself. After some water and a muesli bar, it was time to head back to pick up my pack. I was temporarily geographically challenged (was it this pile of rocks or that pile over there?) and walked too far to the left to descend. I soon realised I was off course, backtracked and ultimately made it back to the track only missing by about 70m where I had left my pack. Another pleasing thing about the climb was how confident I felt on the uneven terrain. Practice on the tough terrain in New Zealand is obviously paying off.

Near Whites River Hut I bumped into a walking group that I had briefly talked to before setting out the day before and they asked how I had gone. Following Disappointment Spur Track back, I briefly stopped at the small hut for a quick lunch and from there it was a straightforward walk out. After quenching my thirst in Jindabyne, I was on my way home. Not a bad way to spend two days!